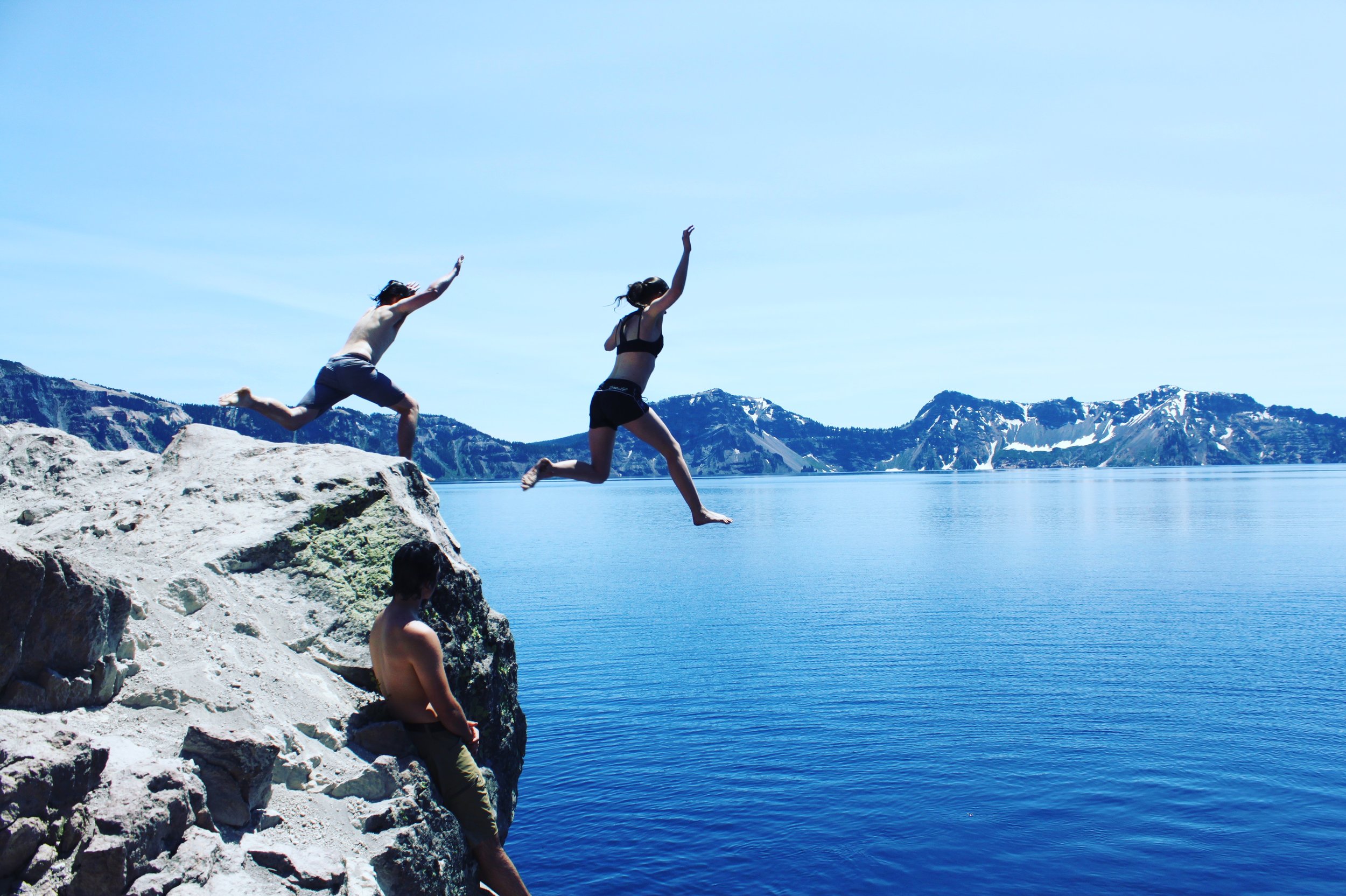 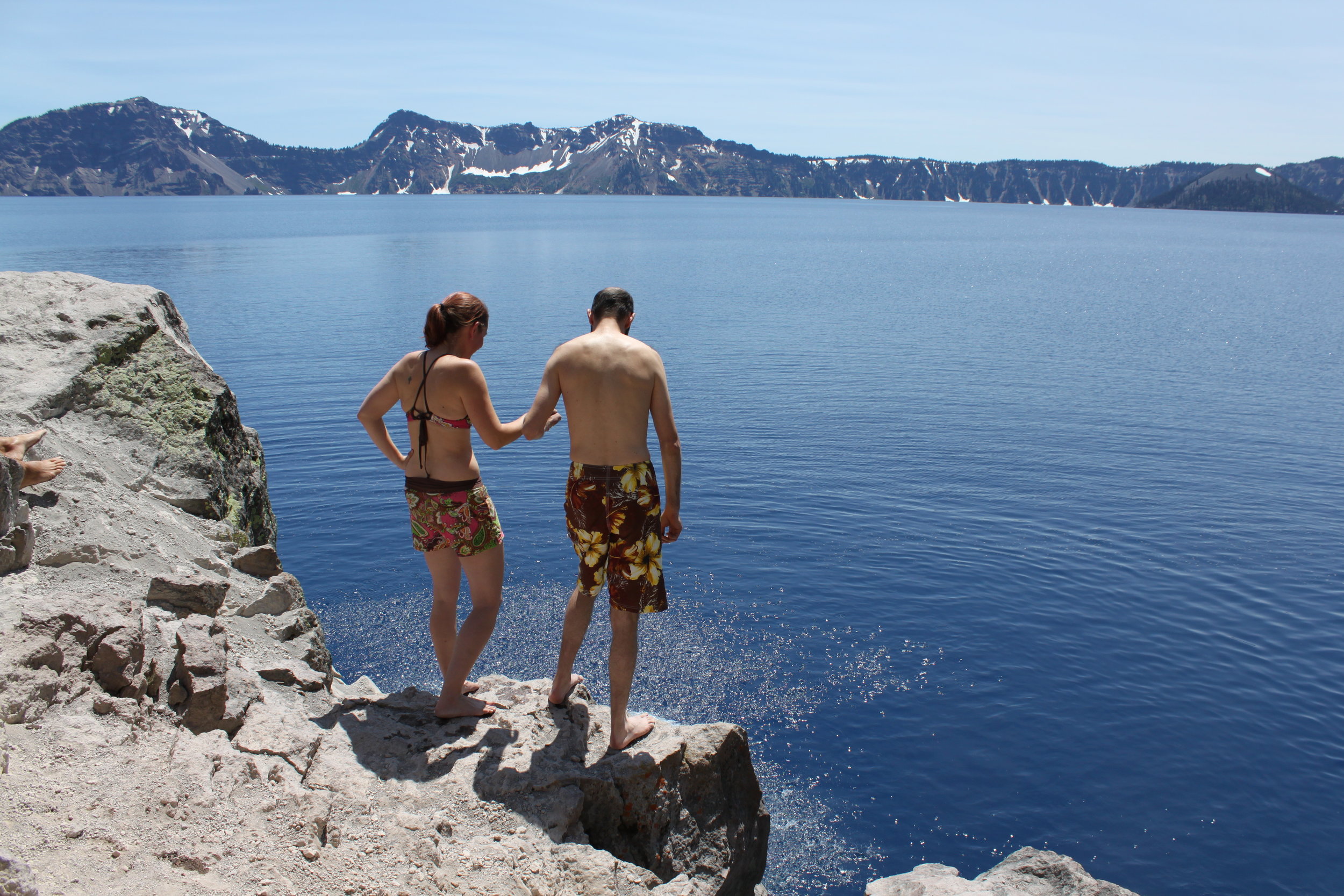 It started out simple enough. The Mermaid Challenge: Between the Summer Solstice and the Fall Equinox, swim in one river, one lake, and one ocean. Anything that affirms my mermaid status is good in my book. And I like to swim. A lot. The camping trip I just returned from, to Crater Lake in Oregon and Big Lagoon on California’s coast, seemed like the perfect time to check off at least two of the Mermaid Challenge requirements.

The day of the Crater Lake swim dawned like any other. I mean, aside from the fact that I’d had a really rough night’s sleep the night before… rougher than usual. Yay camping. My friends and my lovely husband, Noah, knew my goals. There’s only one place where you can enter the water at Crater Lake, and in the height of summer it’s going to be crowded.

We drove around the park, biding our time until it warmed enough for us to consider swimming in the frigid water. And then things started to unravel. Our plan to all hike down to the water together was thwarted when we realized we couldn’t bring the dog down the steep, dusty trail. After a little strategizing and adjusting, our group split up so that someone could wait with the dog while the others went down to swim in the water.

Then when we reached the bottom, it became clear that the most popular way to “experience Crater Lake” was to jump off a ledge 18 feet above the water and plunge into the incredibly deep and incredibly frigid water below. My heart froze before it ever touched the water.

As I stood and watched, over and over again people of all ages, races, and nationalities made the leap off the rock, including two of my wonderful and amazing friends (see the first picture above). I stuffed the growing fear I had as I watched them, thinking This! This is it! This is the supreme, ideal way to complete the Mermaid’s Challenge. What better way than to embrace bravery and fly off the edge into the unknown?

One problem. I’m not good with heights. I was terrified. As I waited for Noah to join me so that he could be part of my triumph, as I watched 6-year-olds line up and leap, my fear continued to grow. But I had ruled out all the alternatives. Anything less than leaping would be a failure. I had already begun pushing myself, terror and all, to the edge of the rock.

When Noah arrived I declared we were going to jump off the rock and into the water together, even as I cried because I knew in my heart I was too scared to complete the challenge as I’d (completely arbitrarily) decided it should be. I had formed a picture in my mind of my ideal self and she looked nothing like the person I really am. I had set myself up for supreme disappointment.

Even before I got to the edge of the rock, I knew I would not be able to jump. But I gritted my teeth and pushed myself to the edge to look down into the blue abyss. I stood there and cried as Noah held my hand, and felt the pressure of a hundred people waiting behind me for their turn to jump… and I didn’t. I couldn’t. In my mind, this was failure. I’d faced my fear, stared it down, and turned away, completely disappointed in myself for not achieving the goal.

But who set the goal? What was the goal anyway? How did I get from “swim in a lake” to “jump off an 18-foot ledge”? And why, if I know myself, would I do that to myself?

I finally stepped away from the ledge (the real one and the one I was leaning myself aggressively over in my mind) and reassessed. The goal had never been jump. It had only been swim. I was the one who had moved the target. I was gas-lighting myself! And now I had to grieve a loss of expectation. It took a while to get there, but I finally did.

I recognized that I was supremely disappointed in myself for not being able to jump, but I could still swim. And that had been the true goal, the first goal. So eventually, after a lot of fuck this is cold! I managed to ease myself into the lake in a shallower area and tread water for three or four seconds (it was fucking freezing). Success! Less glamorous? Sure, but I achieved the goal of swimming in a lake. Maybe I pick a warmer one in the next month to give myself a longer, more luxurious swim.

But I was still stuck in a cycle of self-deprecation. Why couldn’t I bask in this moment? Why couldn’t I recognize that I had faced my fear by standing at the edge of the rock and contemplating the jump instead of flatly refusing it in the first place? I regularly set high expectations for myself, unreasonably high expectations, and then torture myself for not meeting them.

In reality, I achieved so much. I met my goal. I contemplated a scary thing. I was with my friends. All these things matter so much more than jumping. But I had lost sight of that. I had suddenly had a seismic shift in perspective that equated my self-worth to whether or not I could jump, when in actuality, standing on the edge of fear is so much braver than blindly flying past it.

I faced my fear, and that’s a start. I held the hand of my life-partner and felt the love and support of my friends. I’m learning to give myself grace to do things in my own unique way, no matter what those around me are doing. And that’s the best I feel I should ever need to be. Willing to look out, willing to step up to the edge. Willing to learn something new about myself and to love myself no matter what I learn. Willing to grow, however small the increment. 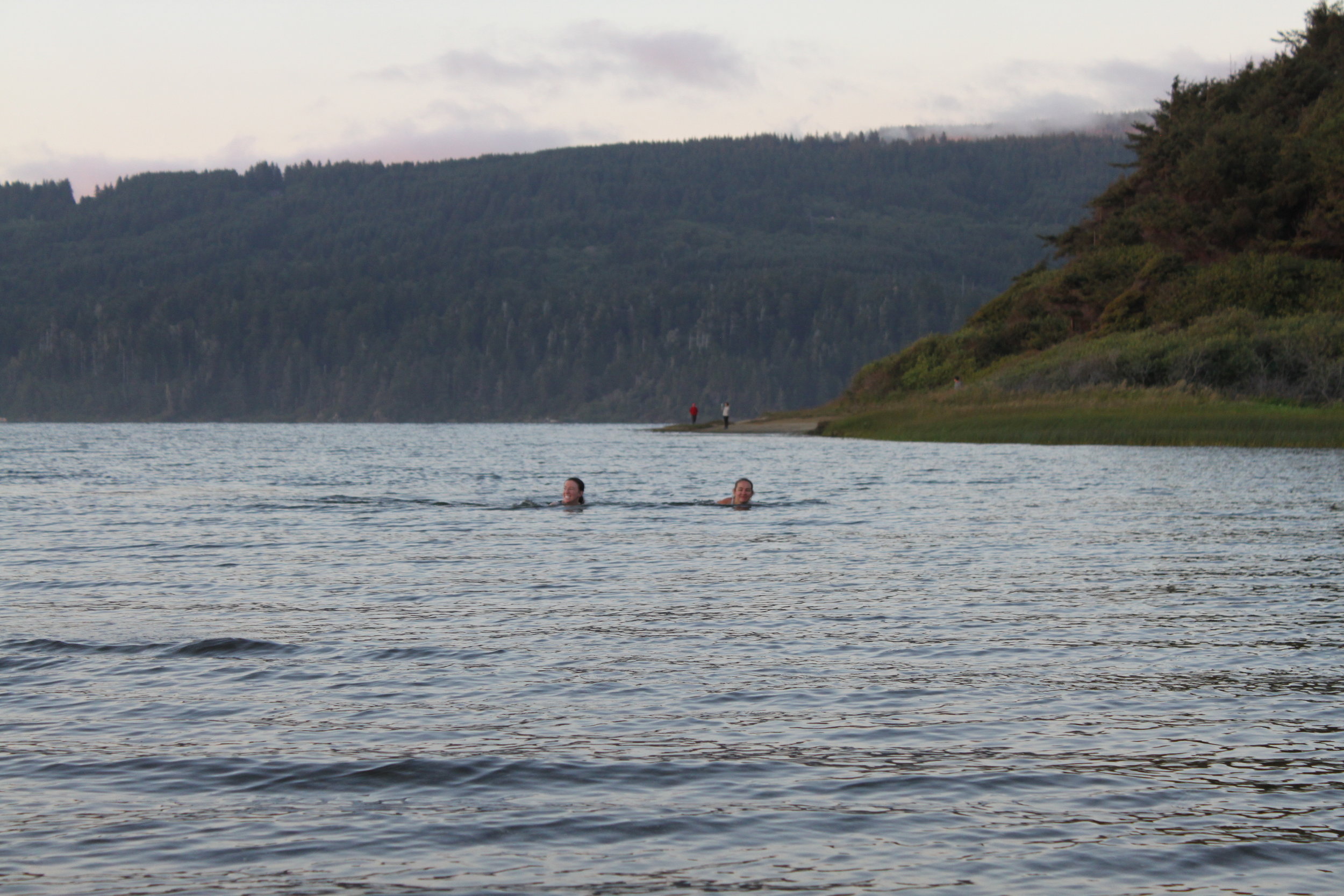 The next day, though it was chilly and we had no swimsuits with us, Lauren and I stripped down to our underwear and took a dip in Big Lagoon, completing another part of the Mermaid Challenge. It was an excellent experience, a memory I will cherish.