I just checked Twitter, and apparently it’s Tarot Tuesday (and yes there’s a hashtag). That’s great news for me, because it gave me the momentum I needed to get into this post today. Some days are easier to blog and have a thought than others, no?

Anyhow, on to today’s card: the Apprentice of Pens… the suit of Pens mirrors the suit of Swords in a “standard” deck (because, you know, the pen is mightier). The suit corresponds with the element of air, the intellect, logic, reason, communication. And Apprentice is the equivalent of Knight… so if you think of a Knight wielding a sword (or a pen in this case), you’ll be able to visualize the energy here. 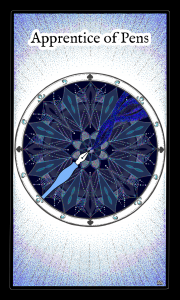 The Apprentice of Pens is that swift kick. The forceful determination, fearless action, and dynamic courage represented here are often not the most graceful and refined aspects of character traits. A little goes a long way in these cases.
Be careful, as you channel this energy and barrel toward your goals, that you don’t damage yourself or others in the process. Sometimes perceived blocks are just that: perceived. Don’t charge in without first taking a mindful assessment of what’s going on. You might find that a better understanding of the circumstances and a small tweak in your creative practice is all you need to get going.
But if you’re experiencing any sort of block in your creativity, a little Apprentice of Pens will help you bust through to the other side and get moving toward your goals.
Key Words: dynamic, forceful, action not grace, courage

I love to think of the Apprentice of Pens barreling into a challenge, not worried about consequences so much, not overthinking, just acting. I often overthink my work, and can whittle a piece down to nothing by contradicting myself and writing out anything that has a hint of passion because I’m worried it will be “wrong” somehow. And yet this card is also about doing just that… or rather, it’s about finding the balance. Because it’s always about balance, isn’t it?

How much charging forward do we do? And where do we need to stop and consider? The analogy of a bull in a china shop comes to mind. When you picture a bull in a china shop, what value association do you put with it? Good or bad? Depends on the goal, right? If you’re looking to destroy a china shop, a bull is the way to go! But if you’re trying to preserve china, maybe not. So… allowing yourself to be both, to hold both aspects of yourself and use them intentionally. That’s a skill.

I’ll be looking for those Apprentice of Pens moments more closely in the future. Because I don’t like to feel like I’m blundering forward, but also I don’t want to feel like I’m holding myself back. Each day, each moment brings new opportunities to strike that balance, to release myself to do the creative work.

What say you all?